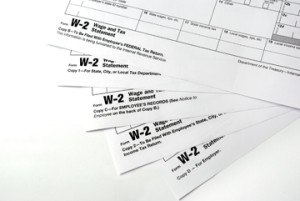 Like Finance staffers need more pressure at year-end: The idea of making firms submit Forms W-2 to SSA earlier just won’t go away because of growing concerns about identity theft.

Latest evidence: The Internal Revenue Service Advisory Council (IRSAC) said in its just-released 2015 annual report that employers should have to send W-2s to employees and the SSA at the same time.

If the IRS could match the information on Forms 1040 with employer-provided W-2s, that would result in fewer fraudulent refunds, IRSAC said.

The earlier filing was also discussed at a recent Senate Finance Committee hearing.

In 2015 for example, employees started filing their Forms 1040 to the IRS on Jan. 20, but employers had until March 31 to send W-2s to SSA if they did so electronically.

The IRS doesn’t begin matching W-2 data to the tax returns until July, after the tax season has ended.

Each year, due to the time lag, the IRS pays out billions in fraudulent refunds. That amount could be cut by bumping up the W-2 deadline, perhaps to as early as Jan. 31.

In addition to accelerating the deadline, other changes have been proposed recently.

The Government Accountability Office said in a report on refund fraud that more employers should be filing W-2s electronically.