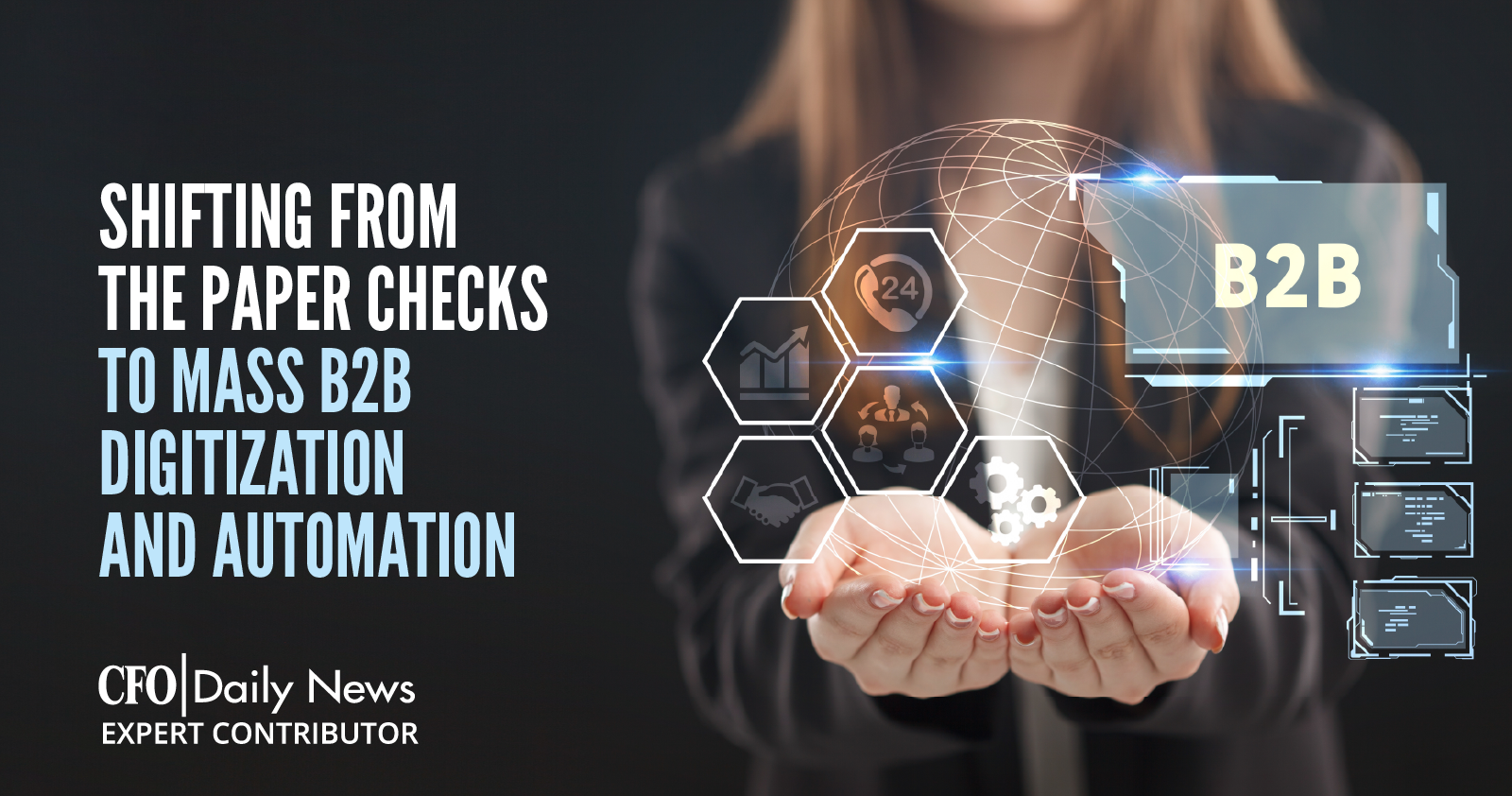 Each year, 120 trillion dollars are exchanged between businesses around the world. And more and more of those transactions are being made digitally.

The Association for Financial Professionals (AFP) reports that paper check usage as a percentage of U.S. B2B transactions has lowered from 81% in 2004 to 42% in 2019. And it will continue to decline as ERPs, banks and the predominance of accounts payable automation software makes it more attractive to transact digitally.

In fact, AFP reports that ACH is now the predominant B2B payment method, and that nearly 60% of practitioners indicate that their organization is either very or somewhat likely to convert the majority of its B2B payments to suppliers from checks to electronic payments.

But true, mass digital adoption has been slow. Paper checks, despite manual processing and slow mail delivery, are still a seductive and easy payment method fueled by an “if it ain’t broke, don’t fix it” mentality.

So, how do we overcome the barriers of achieving a massive shift to digital payments and away from paper checks?

Some say that a universal digital payments standard is the answer, but I don’t think so.

Businesses use hundreds of different ERPs with thousands of different banks. Getting everybody to agree to a standard is hard, and motivating everyone to adopt the same standard and spend the IT dollars to do so is unlikely. And after decades, standards like EDI or ACH, CTX have proven to be an option but not the ultimate answer.

Remember that change is embraced when something is not only technologically better but also easier and cheaper to use and a natural evolution of what came before it.

Others say the solution is accelerated payments using a real-time payments network to allow businesses to pay each other instantly.

It sounds great in concept, but would it be cost effective? Are people going to adopt it at scale? And with B2B transactions usually occurring after 30 or more days after an order, is shaving 12-24 hours off of settlement really the missing link?

We are seeing interoperability as the answer to shifting from the paper check towards mass B2B digitization and automation.

Interoperability, in this context, requires a network of networks connecting multiple parties – from settlement networks and participating banks to ERPs and integrated payables platforms – allowing for multiple payments languages to flow through a single exchange.

If you’re like most consumers, you have a debit card allowing you to withdraw cash from a terminal. How does the machine know how much money you have in your bank account?

You guessed it – interoperability.

Each ATM is part of a broader network. In the early days, there were many networks, and you could only take out money from machines that were part of your specific network. Names like TYME and STAR were two of the popular ones. Then someone had the brilliant idea to allow these networks to talk to each other, and that is what we call interoperability.

Now, we don’t think twice if any given ATM will be able to give us cash. We do think what fees it will charge, which is a whole other matter.

So how do we encourage digital payments?

We get the equivalent of the ATM networks – the accounts payable and accounts receivable service providers, software companies and banks processing B2B transactions – to work with each other. And it’s not by convincing them all to speak the same language or cutting a half a day of processing time. By creating an interoperable framework value all participants can derive value.

Networks like this will allow suppliers to receive faster payments because they can be processed the same day they’re initiated by buyers, eliminating mail float or time for an AR team to key in information.

Suppliers also would have more control because they could broadcast their payment preferences to buyers via the network. No one would ask buyers to change their payment behavior, so they could continue to submit payments from their existing platforms.

All this would give CFOs and CEOs the means to reliably predict and maximize cash flow, thereby increasing the capacity to grow their businesses.

Ultimately, payments networks with open platforms will enable sellers and buyers to digitally transact without massive behavioral or technology changes. And this means a future where paper checks and manual processing virtually disappear.

The good news is that payments networks like this do exist now, and adoption is on the rise. But like anything else, it will take a collective effort by everyone involved to achieve mass adoption.

It’s time to position business for the future with an interoperable platform which automates ACH and other future digital payment forms.