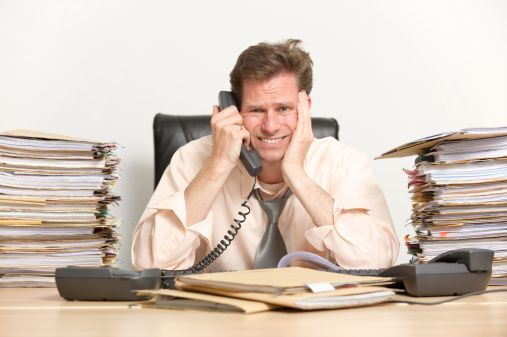 Yoga and meditation are nice, but if you’re looking for a novel approach to combat work-related stress, here’s a non-traditional option to consider.

Introducing The Anger Room, a 1,000-square-foot space in Dallas that charges customers to smash inanimate objects such as cups, vases, printers and clocks.

The Room charges $25 for five minutes of smashing, $45 for a 15-minute session and $75 for 25-minutes of destruction. However, customers can customize the room setups if they’re willing to shell out around $500. According to a New York Times piece on The Anger Room, the most expensive setup so far has been a faux retail store, replete with racks of clothing.

And the unique stress-reliever seems to be catching on among upper management at giant corporations. In fact, customers have included executives at large corporations, including Hilton and Microsoft, according to The Anger Room founder Donna Alexander.

Of course, the stress-reliever can easily be rolled out company-wide — and often is. Customers of the Anger Room have paid to re-enact a scene from the movie “Office Space,”where the fed-up computer programs beat a printer with a baseball bat.

Plus, the business can also customize the workplace experience and recreating a specific company office. As Ms. Alexander described it to The Times:

“You have a desk with a computer and phone, chair and a mannequin dressed up in a suit, uniform or whatever relates to their real-life issue.”

Alexander added that Donald Trump and Hillary Clinton mannequins were a big hit during the election.

The numbers-oriented side of CFO may wonder: How much does a business like the Anger Room cost to function? Once you take of the insurance (a $2 million liability policy), not much. As Ms. Alexander put it:

“All you’re doing is just setting up the room, reinforcing the walls, giving them a bat and crowbar, getting some smashing items and they just go in there.”