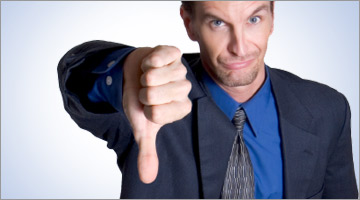 You hear them all the time – maybe you even use them now and then. But should these 10 words receive a time-out?

The folks at LinkedIn think so. They’ve come out with the Top 10 Global Buzzwords in LinkedIn profiles today.

The belief: That these words have been bandied around so much that they’ve started to lose their impact. And in fact, they may irritate some folks.

So should you expand this to impose a buzzword ban in your own Finance shop? Take a look at the list. Even making staffers aware that some of these are played out could keep them from leaning too heavily on them on a day-to-day basis.

10. Expert. Who doesn’t like to think of him or herself as an expert? But it seems this term has been overused of late, which is undermining some of the credibility. Yes, it’s OK to defer to your resident Excel “expert” now and then, but make sure that individual possesses a real proficiency.

9. Organizational. The T&E policy change will be an “organizational” one, but you don’t have to call it that. Organizational rings on “consultant-speak” and may turn people off, meaning they’ll either be less likely to buy-in or may miss some important information in your explanation.

7. Strategic. You want your staffers to think strategically about cash flow, cost control, etc. But you probably don’t want them to talk about it that way. This is one where it’s better to show you can act and think strategically, rather than use the word strategic.

6. Responsible. You can take this word two ways. One, you are a responsible employee – hopefully everyone is, so that’s a nonstarter. Otherwise, talking about what you’re responsible for is a gray area and a place where people tend to exaggerate. Handling a task once doesn’t make you responsible for it, but some take it to be.

5. Extensive experience. You likely have seen that on a resume or two. And if it is, it’s one of the first things you want to delve into in an interview. After all, what one person considers “extensive” may not be the same as what you do.

3. Creative. Of course if you see this on a LinkedIn profile or resume for a prospective candidate, it may pique your interest, since it’s not a term used in Accounting that often. But again this is a situation where you’d much rather hear examples of that creativity, instead of a label.

2. Passionate. Passion is something you see in staffers’ work – not something they tell you they are. Also, be careful about using passionate when speaking to someone “I can see you’re very passionate about this topic” – sometimes it’s a veiled way of saying someone is overly-emotional.

1. Motivated. Yes, it’s a major managerial problem when you have a lack of motivation, but being motivated may not be worth celebrating.

So what do you think of the list? Are there any glaring omissions? Or would you make a case for any of these to stay? Tell us in the Comments section.