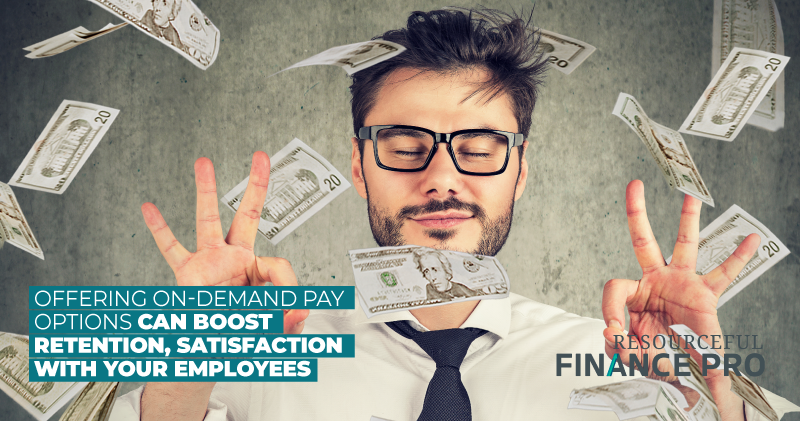 Earned wage access, also known as on-demand pay, has been a hot topic in the Payroll space recently. While it may not be on your radar right now, many employers are using it as a key retention tool – and it’s becoming more popular with employees, as well.

New research from payroll provider ADP shows just how common earned wage access is becoming with companies, along with why you may want to consider giving the benefit a closer look.

The data was highlighted in a recent presentation by George Mavrantzas, vice president of strategy and thought leadership at Wisely Pay by ADP, at the American Payroll Association’s Virtual Congress & Expo.

Some may think that earned wage access is a pay advance or a loan. However, that’s not how on-demand pay works. Unearned wages don’t qualify – it’s pay that employees have already earned. Wages accrue and are calculated based on hours employees have worked. The balance available is based on these wages, and employees can withdraw as much as they need from this balance between paydays.

Right now, there is broad interest in on-demand pay from each generation in the workforce, regardless of whether they’re blue-collar workers or white-collar employees.

More than three-quarters of workers surveyed by ADP across all age groups, income levels and educational levels said it’s important for their employers to offer earned wage access to employees. And almost 70% said they’re likely to request their wages early at least once within the next 12 months.

When looking at specific age groups, Millennials (ages 25-44) and Gen Z (ages 18-24) workers are more likely to want earned wage access from their employers. Millennials specifically see on-demand pay as a workplace benefit (82%). They’d prioritize a job offer from a company that offered it (75%) – and they’d even consider leaving a job that didn’t offer it to employees (60%).

Millennials and Gen Z workers also believe that they should have more of a say in deciding when they should have access to their pay than their employers do, which is something to consider if your workforce skews younger.

But on-demand pay could be a key addition to your benefits offerings regardless of the age of your workforce. After earned wage access is implemented, employees use it more often than they initially expect. Nearly 80% of workers have used earned wage access at least once when their companies gave them the option.

When looking at employees who have access to on-demand pay, however, it’s a different story. Close to two-thirds (62%) ended up using the benefit every pay period or every other pay period, while 31% used it between one and six times a year. Only 7% used it when a specific need occurred.

So, the demand for earned wage access exists, and employers that offer it will likely see many workers take advantage of the benefit – and value it.

With employers, 90% of them have some awareness about flexible pay options that are available for their employees. If they would consider offering earned wage access, 95% said it’s important to use a reliable name, and 89% would work with their current payroll provider to provide the service.

Currently, 55% of employers surveyed offer their employees earned wage access in some form. There may be a disconnect between whether employees are aware this benefit is available, though – only 40% of workers surveyed said their company offers them earned wage access. That means that outreach is important if you offer this benefit and aren’t seeing employees take advantage of it. Making sure employees are aware it’s available is key, just as it is for any other benefits you offer.

In addition, almost all employers (92%) believed that there should be a limit on the amount of earned wage access transactions allowed per employee, with one to two per pay period being the preferred frequency. The same percentage believes that only a portion of workers’ wages should be available early, somewhere between 25% and 75% of earned wages.

Most employees that use earned wage access (71% of those surveyed) do end up withdrawing between 25% and 75% of their pay from their earned balance, so this may be a good limit to set for the benefit when establishing it.

Employers that offer earned wage access to employees overwhelmingly say their employees like using it (96%) and that it improves workers’ sense of financial security (96%).

Earned wage access also helps employers with two key areas: 96% of those who offer it say it helps them attract new talent, and 93% say it helps with retaining current employees.

Working closely with your potential on-demand pay provider can help alleviate these concerns. It may also help to poll your employees about whether there’s any existing demand for earned wage access before driving in.

But given constantly shifting attitudes, and workers’ growing financial needs in an unstable economy, it’s likely that more people may be interested in on-demand pay, and you could make yourself stand out in the crowd by offering this benefit to current and potential employees.