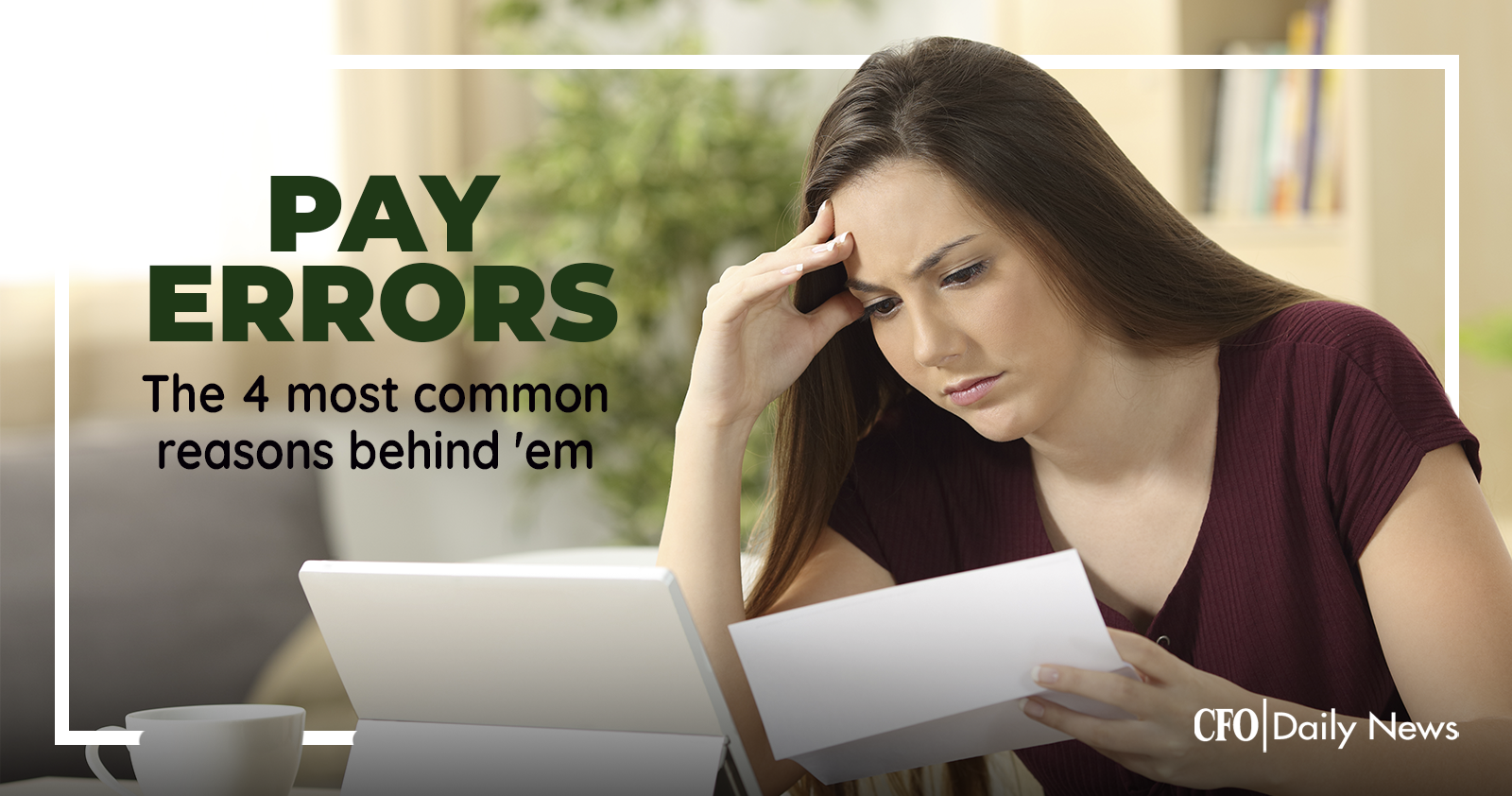 Any company can be vulnerable to pay errors, no matter how careful your payroll staffers are.  And if those errors make an employee’s pay late, you can bet that won’t go over well.

It’s happening. All too often. One in five employees has received his or her pay late in the past year. Of that group, 8% have had it happened multiple times this year.

Those eye-openers come courtesy of the 2019 Pay Experience Report by Ceridian.

You know how important an issue pay is to people. Even one late check is one too many.

So what’s behind the missteps? Here’s a rundown of the four most common reasons causing today’s pay errors so you can ensure your own department doesn’t fall to them.

Pay error 1: Disorganization within the company

Any company could hit this top snag.

No technology to blame here – old fashioned organization (or lack thereof) is standing between many people and their paychecks.

More than a third (35%) of your peers say organizational disorganization has resulted in a late employee paycheck.

Now’s a great time to touch base with your own payroll team to see where they feel the holdouts live so you can work to streamline wherever possible.

Direct deposit is supposed to be the easier, more secure, quicker way to get paid. As long as you don’t run into a glitch, that is.

And that’s what happening to your peers. This past summer, 1,400 out of 2,950 New Orleans city employees failed to get their pay when ADP experienced a technical issue when processing direct deposit payments for those workers.

Granted, sometimes tech issues are out of your control. But even when that happens, make sure your team gets in front of it to let employees know you’re doing all you can to correct the issue.

Of course it’s tough to pay people when you don’t have the funds available!

It’s a less-common but still troublesome issue for nearly one in five (19%) people who were left disappointed on payday.

Admittedly this tends to be an issue for smaller businesses. But it’s hitting them hard.

Nearly a third of small businesses (31%) say they can’t pay vendors, pay back their loans or pay their employees due to cash flow problems, according to the recent State of Small Business Cash Flow study.

Whether it’s tightening up on slow-paying customers or cutting back on expenses, it’s an issue that needs to be in hand ASAP.

Neither snow nor rain nor heat nor gloom of night may stop the U.S. Postal Service, but something else sure gets in the way now and then.

A full 14% of employees say a mail delivery issue has kept them and their paychecks apart.

Yes, it may be an actual delay with the mail. But it could also be an issue with an employee’s address, or a holdup in your own mailroom.

Make sure employees have a mechanism to alert Finance (not just HR) as soon as they have a change in address, so that it doesn’t impact their ability to get paid on time.