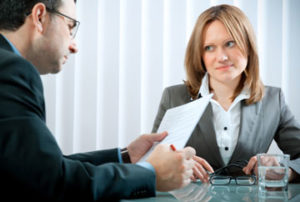 Sixty seconds. That’s the maximum amount of time two-thirds of hiring managers spend reviewing a resume to make up their mind about a candidate. Which is why many folks try to maximize that minute by making their resume stand out. Only this might not be what they had in mind.

The folks at CareerBuilder just released a list of cringe-worthy resume gaffes.

As you’re looking for that next member of your finance team, we sure hope you don’t run across any applicants like these, ranging from:

To the overly enthusiastic: The applicant’s resume had a different font type for every sentence.

The overly dramatic: An applicant’s resume was only one sentence.

The over-extended: An applicant had the same employment dates for every job listed.

But even if you’re willing to overlook any of these, there are some resume issues that are just plain dealbreakers, according to your peers. Check out what’s enough to make them file that resume … in the recycle bin:

Considering just how much a bad hire can set you back – a single bad hire costs companies an average of  $17,000 – no organization can afford to misfire on this front.

And even if you’ve got what looks like a solid citizen on paper, remember that there are several ways bend the truth to make themselves more appealing

It’s worth a little extra time to dig deep on that first pass and to follow up on anything that might come back to bite your department during early interviews. That way you can be more confident anyone you bring on to your finance team truly deserves to be there.

Info: For more on the CareerBuilder resume survey, go to press.careerbuilder.com/2018-08-24-Employers-Share-Their-Most-Outrageous-Resume-Mistakes-and-Instant-Deal-Breakers-in-a-New-CareerBuilder-Study